The popularization of the Scala programming language, noticeable by the abundance of opinions and criticism on blogs and social networks (like this one by Nikita Ivanov from GridGain and the popular Yammer case), greatly increased the amount of information about the language. However, the quality of such information often leaves much to be desired.

Whether those opinions are favorable or contrary to the Scala, they often contain outdated, superficial or biased statements. The goal of this article is to help those learning or evaluating Scala to come into their own conclusions. It presents the most common questions about language and its environment and, for each one, added clarifications, examples and links, favoring the formation of a better opinion or a more accurate assessment.
Scala is a compiled language, designed to run on a managed environment, most likely the JVM, and offers the union of the functional and object-oriented paradigms. Scala offers functional and object-oriented programming, a modern compiler and a type system checked at compile time, as in Java, but with the expressive syntax of (usually) interpreted languages, such as Groovy or Ruby. However, the same features that makes Scala expressive can also lead to performance problems and complexity.
Some suggested Links:
scalatutorials
Tutorial's point
scalaDocs
udemy scala
Oracle docs scala
Posted by Unknown at 08:10 6 comments: 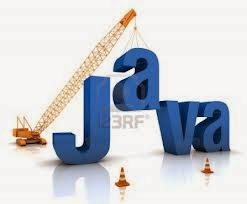 Java is a computer programming language that is concurrent, class-based, object-oriented, and specifically designed to have as few implementation dependencies as possible. It is intended to let application developers "write once, run anywhere" (WORA), meaning that code that runs on one platform does not need to be recompiled to run on another. Java applications are typically compiled to bytecode (class file) that can run on any Java virtual machine (JVM) regardless of computer architecture. Java is, as of 2014, one of the most popular programming languages in use, particularly for client-server web applications, with a reported 9 million developers. Java was originally developed by James Gosling at Sun Microsystems (which has since merged into Oracle Corporation) and released in 1995 as a core component of Sun Microsystems' Java platform. The language derives much of its syntax from C and C++, but it has fewer low-level facilities than either of them.
The original and reference implementation Java compilers, virtual machines, and class libraries were developed by Sun from 1991 and first released in 1995. As of May 2007, in compliance with the specifications of the Java Community Process, Sun relicensed most of its Java technologies under the GNU General Public License. Others have also developed alternative implementations of these Sun technologies, such as the GNU Compiler for Java (bytecode compiler), GNU Classpath (standard libraries), and IcedTea-Web (browser plugin for applets).
Some Suggested websites for reference:

Some Other Interesting blogs